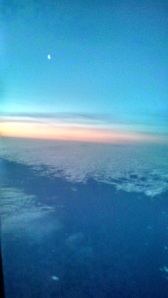 For most of our lives, our feet are planted firmly on the ground and our view of our home is limited to the square foot or so of ground under our feet. But the occasional vacation over a great distance (too far to drive or not convenient to cruise by ship) gives us an opportunity to see the earth from above.  Way above the earth, in fact, somewhere between the International Space Station (however high that is) and the ground but definitely within the pull of gravity. Flying always fascinates me and I inevitably sit hunched over the small cabin windows trying to see all that I can see of what’s below me.  No sleeping or reading or gaming for me unless the cloud- cover is too thick to see the land below or long stretches of endless ocean turn the view into monotony…although I am apt to be just as fascinated about white-caps and ships and clouds as I am anything else in this world. And I have become increasingly fond of taking photos out the window of all that I see whether I can identify it or not.  The photos may be blurry or skewed by the small curved windows but I take them all the same. And seeing the earth from this perspective tends to occupy my mind and sometimes makes me very philosophical regardless of how long and tedious the flight. It is akin to the feeling we all got when seeing that now famous photograph of the earth from space that quickly got dubbed “the big blue marble” and reminded us all how very small the earth is and how very fragile our existence is on this island in space. But then, being the person I am and the vagaries of my mind, I soon forget the big expansive philosophical ideas and move on to the more trivial and “down to earth” type notions – pun intended, of course. 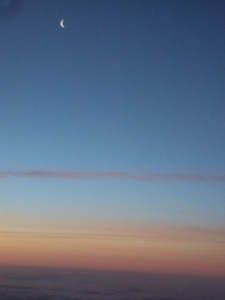 What always catches my attention at first is the sheer beauty of the earth from this viewpoint. Add a little sunrise as you are headed east while a small sliver of moon remains and it is even more beautiful. Or, is it the other way around?  One of these photos is the late evening sunset as we leave Atlanta and the other is the sunrise somewhere over England as we travel towards Amsterdam. Can you tell which is which? That is the trouble with photos taken from airplane windows – you just cannot tell where you are exactly. Slipping into “space” takes away the familiar and the known and leaves you somehow free to leave your gravity-bound burdens behind like stones scattered across the field.

Now, I can certainly understand why people love to publish those pictures from space. There used to be quite a market for photos of homes and town landmarks taken from small airplanes. Today, I think people are more apt to use Google Earth® to find and print pictures of their neighborhood and home.  And who hasn’t stood on a mountaintop in the

Smokies and scanned the horizon to see several states or more from a single vantage point? I remember childhood visits to Rock City on Lookout Mountain in Tennessee where it was advertised that you could see seven states from that point.  Now, three states, I could imagine – Georgia, Tennessee, and Alabama – but seven, I just could not comprehend.  And even if I saw them, I do not believe I would have realized it.  It is the same from the airplane seat. Unless you’re low enough to clearly recognize landmarks, you are just seeing land or sea or clouds. All the beauty without the dirt and grime and ugly marks left on the land.

But not quite; somewhere over England (at least the steward said that it was northern England), I see what is just a small speck of white – a little cloud somehow out of symmetry with the rest of them.  I snap the photo and move on to something else.  When I enlarge the photo at home, I see that it is not a cloud at all; it is smoke from a smokestack.  It could be clean steam but somehow I find myself doubting that it is.  It rises into the air and does join with the clouds eventually but what poison does it also carry with it? So all the dirt and grime are not hidden from view after all.  I tend to try to keep an open mind and not preach about pollution but I am reminded that we humans tend to forget, with our feet firmly on the ground looking down and digging and building and draining and burning, that our technology and industry can be so destructive to the earth and there are some types of damage that cannot be undone.

But it is best to just enjoy the beauty and maybe ponder where on earth you are in the sky.  Now, that line certainly sounds like a contradiction in terms.

As we flew over England, I noticed the farmland and all the plots of ground that were, no doubt, ready for spring plowing. I am struck by how much the farmlands look like a patchwork quilt in various shades of green and tan and black.  I think that the farms on the east coast of the US may look very much like this from above but it is definitely very different visually from the large farms in the Midwest with their perfectly formed irrigation circles.

Speaking of circles, I found myself looking for crop circles but, alas, we were way too high for that.  But I looked all the same although I suppose it is the wrong time of year since the wheat would just be being planted in the spring and would not be tall enough and, therefore, not ready for a good crop circle design for another two to three months.

But I did notice that there were some odd shapes in the clouds, some of which might be 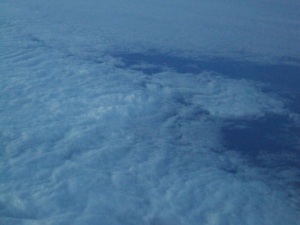 said to be circular in shape.  So I decided that they must be “cloud circles” and, no doubt, inserted into the clouds by aliens trying to get a message to us in some weird geometric language using shapes in the clouds much like they do in the English wheat fields.  I have decided that I know why there are not so many crop circles in the United States even though the fields are ginormous (bigger than enormous) and could support a wide variety of complicated and interesting geometric designs.  It is because the public schools are not doing a very good job of teaching geometry anymore (got to blame someone) and most Americans do not know a right triangle from a spheroid. For example, I just looked up spheroid in Wikipedia and it says it is an “ellipsoid of revolution is a quadric surface obtained by rotating an ellipse about one of its principal axes”. Now did you know that?  Of course, you didn’t and probably, like me, still don’t have a clue what it is except it must be sort of shaped like a sphere or maybe an egg.  And that is exactly why the aliens are not doing crop circles in the US – we wouldn’t understand what the heck they were trying to say even if they used plane geometry.  I assume that the English people still know Geometry or, at least, the aliens think that they do.  It might have something to do with Stonehenge and the fact that it is roughly circular in shape.  I guess the aliens figured that, if we humans had a circle figured out some years ago, then we’d be speaking pretty good Geometry by now.  Unfortunately, we were more right-brained than left and went in another direction and so we speak English.   And, now we’re come full circle back to the land over which the plane was flying – England.  (Yep, you got it – all above puns intended.  I just couldn’t resist.) 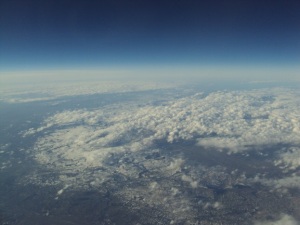 Now, I also noticed snow on the hills and mountains. This doesn’t bode well for our trip to the Netherlands specifically to see tulips in bloom.  I wonder if they have a Punxsutawney Phil who predicts six more weeks of winter.  I suppose the groundhog for Europe would be named Heinreich or something.  Do they even have a Groundhog Day? Wasn’t Punxsutawney settled by the Germans?  That might be a blog for a different day – what countries celebrate Groundhog Day.  But I digress, it would appear that spring will be late in arriving in Europe and that might have an impact on our trip indeed.

And there is the coast so we’re moving over the North Sea or maybe the English Channel – hard to say from this distance.  But I see interesting crescent shaped harbors (?) or maybe beaches below.  There do not seem to be marinas or other manmade structures in view – just the curious semi-circular beaches.  Could these be “beach circles” or beach semi-circles at least?  I think maybe the aliens are really pulling out all the stops trying to communicate.

And a tiny speck of color on the Sea catches my eye but turns out to be a very large cargo ship once I crop and enlarge the photo. 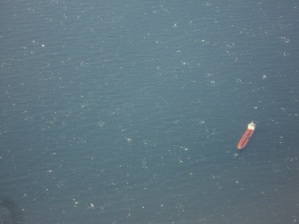 It seems strangely alone on such a large expanse of water.  I somehow did not think of the North Sea as being so very large.

Later, in crossing over thick cloud cover, I notice the shadow of our plane reminding me that, not only is the earth a fragile vessel

but I travel over the earth in an even smaller one.  Size becomes relative when you change your vantage point.

But, then we are over land again, and the Netherlands are in view.

I am at once struck by the canals and rivers and lakes and I am reminded that most of the Netherlands is below sea level.

One of the guides on our trip remarked that there is an old saying in the Netherlands that states that God created heaven and earth but the Dutch made their own land to live on. In looking at my airplane window photos, I am

reminded of this and marvel at the scope of the project – to somehow keep an entire country dry and above water when all of it lies below sea level. The extent of the problem is clear as every field is outlined not by fences but by canals filled with water.  And the streets and the homes are surrounded by canals filled with water.  And there are large lakes created by channeling the water away from the fields. 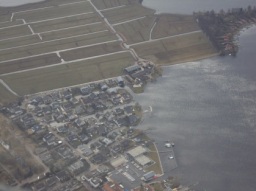 Twelve days later on our flight home, I didn’t have as much luck with my airplane window photos. Most of the flight we were at an angle with the morning sun that would not permit the window to be opened without being blinded by the bright sunlight.  But I will be checking the view from above when next I get the opportunity to fly.  It is a wonderful way to learn to appreciate this world we inhabit and a reminder of how very small and fragile it all is.