He wasn’t really a visionary. Well, at least not where having a long and storied career with lots of financial success was concerned or where he invented something that changed the world even though one might never make much money on it. After all, saving the world brings success in its own right without having to dither over whether or not he was worth this many million dollars or that many.

Hallway in the foyer of the manor. 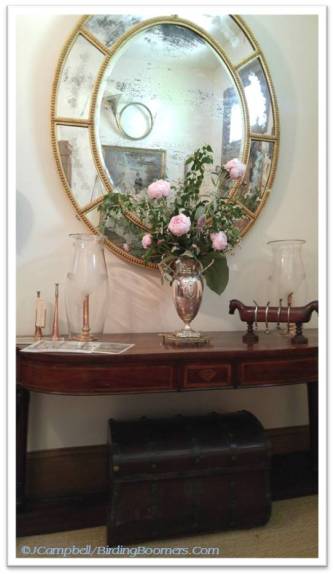 Now, let me back up and correct myself…..our protagonist, Harvey S. Ladew II, did live a life filled with many memories and stories. At least the docent at the Manor had lots of stories to tell when we took the Ladew Manor tour last week so I will assume that Mr. Ladew, the last of his line, enjoyed telling tales of his travels and adventures during his life and didn’t just leave them in an old trunk somewhere for the docent to find at some point a hundred years or so down the road to tell to tour attendees.

Harvey Ladew was indeed a success if you define it in terms of living life on his own terms, having adventures with the likes of T.E. Lawrence (of Arabia) and young Prince Faisal (way before he became the King of Saudi Arabia) as he traveled the world at the turn of the 20th century, and hobnobbing with other renowned celebrities….like Cole Porter and Clark Gable and Somerset Maugham. But, more important to me, Ladew was a success when it comes to building beautiful gardens….like those at his estate near Monkton, Maryland.

Which is what brought me to the Manor in the first place….the gardens. And, it was those gardens that hindered my tour of the manor once I got there. I’d really like to say that I took the tour and totally enjoyed all the docent’s wild stories about Mr. Ladew and all the antiques and everything manor-ly…but I cannot.

That’s because we had started in the gardens and roamed around a bit in the sun and then rushed up the hill to the house for the tour….where I arrived hot and exhausted. I found that standing in one spot listening to the docent talk didn’t work out too well for me or my aching, arthritic joints. So, I considered……I could further sap my strength and aggravate my back and hip standing listening to the docent….or I could find a cool spot to sit and save myself for the rest of the gardens.

Tick-tock, tick-tock….yep, it only took me two seconds to consider that deal. I opted to rest and save myself for the gardens. With 22 acres of gardens, I knew I might not get through them all but I was going to give it a shot. So, I gave my dear and long-suffering husband (he suffers for my art) instructions to get some good stories and take some photos and I found the one chair in the foyer that wasn’t roped off or otherwise marked with a no touching, no sitting sign…… and I sat down right by the door to wait.

According to the docent’s tale, the original owners of the home embedded this silver dollar into the stair newel post the year they paid off the original mortgage – 1847. Amazing that the coin survived these 169 years. I’m thinking about getting a silver dollar for our stairs….if we ever get the mortgage paid off, that is.

So, here’s the gist of what I heard – much of it second hand, of course. (And I supplemented the stories with some information from the estate website and the internet.)

Harvey S. Ladew II was born on April 6, 1887 to a wealthy family in New York. His father had made a fortune selling industrial leather belts. You know, before there were electric motors and such, they used pulleys and gears all connected with huge leather belts. Harvey had one sister named Elise who married into money on her own….well, more money since her family had money already…..but she has her own story to tell so I won’t add more on that here. Harvey never married and had no children…so his legacy was his manor and his gardens.

The slippers shown below are called “pinks” not because of the color. Each hunt club had it’s own colors. Ladew’s club colors just happened to be red….faded here over the years to look more pink than red. When you came in from the hunt, you pulled off your muddy boots and put on your “pinks” to wear in the house. 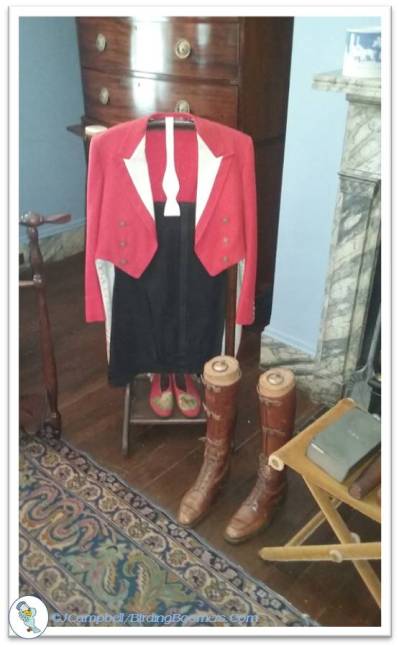 As a child, Harvey was educated by private tutor at home and spent some years learning to draw from the curators at the Metropolitan Museum of Art. He didn’t really have any formal schooling and didn’t attend college at all, let alone an Ivy League College….although it seems that he ran with an Ivy League crowd. As such, Harvey was home-schooled and/or self-taught…not unusual at the time.

According to the Ladew Topiary Gardens website, Ladew spoke several languages and learned French as a child before he learned English. He served in World War I as an Army liaison officer where his fluency in French and other languages was noted and he became quite helpful to his commanding officers.

But, what Harvey Ladew loved most was hunting – particularly, fox hunting. After his parents died, he discovered that, after liquidating the leather belt factory and other familial assets, there was a good bit of money……that would allow him to do some serious fox-hunting….pretty much anywhere he wanted to do so. In fact, he calculated (according to the docent) that he could live quite comfortably into his fifties and might not ever have to find a job and actually work for a living. As it turns out, Mr. Ladew had under-estimated and, though he lived to a ripe old age of 89, he never had to give it all up and get a job. It’s a good gig if you can get it….being part of the 1% and all.

So, he spent his life as a traveler, an artist, a fox-hunter, and as a gardener. Well, let’s say a designer of gardens….well, let’s say as a designer of his own gardens and estate…..although he was a friendly kind of guy so I’m sure he gave all sorts of gardening advice to his friends over the years. Ladew bought the 200-plus acre estate in Monkton, Maryland in 1929 because fox hunting was big in Maryland….and, did I mention, Ladew loved fox-hunting.

Riding gear: 1. Tool for stuffing your pant legs into your boots. 2. Button Hooks for boots 3. Tool for pulling your boots up by its straps/loops. 4. Shoe horn for boots.

More riding/hunting gear…..necessities really…..at least the flask and sandwich holder are.  The item in the center is a mystery to me.

When he first came to Maryland looking for new hunting grounds, he leased a property next door to a hunt club in Monkton. Later, he bought the old Pleasant Valley Farms nearby and made the estate his own. He spent his summers in Maryland and traveling the world hunting and exploring and having adventures and spent his winters at his estate (Pied a Mer) near Delray Beach, Florida. It was an amazingly difficult life….so much to do, so many foxes to chase, so many topiaries to design…..so little time. 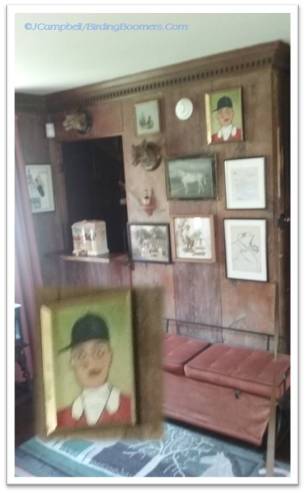 No, that’s not a real Picasso. Apparently, Ladew hated Picasso’s abstract works and was somewhat vocal about it. As a joke, a friend gave him a “knock off” Picasso….a portrait of Ladew.  It appears that he treasured the gift enough to keep it in spite of his feelings about abstract art.

So when he wasn’t hunting and having adventures, Ladew visited gardens. In England he visited famous gardens….some designed by Gertrude Jekyll. Back home, he set out to build beautiful gardens at the estate similar to those he had seen in England and France. He liked topiaries so decided to design a topiary garden. The rest is history. He designed and built 15 different themed gardens spread out over more than 22 acres. Before he died in 1976, Ladew himself set up the not-for-profit organization to preserve his beautiful gardens and share them with the world. The gardens and manor were opened to the public in 1971 and this year marks its 45th anniversary.

Ladew could play the piano and enjoyed entertaining his guests on the baby grand, a Steinway of course. But apparently he wasn’t very good so the story goes that the guests stayed for the first song but usually had excused themselves and left the room before the second song was completed.

Ceiling detail in the sitting room. Ladew had it put in and wanted it to look as old as the house but it was pretty much stark white and looked very shiny and new so he closed the damper on the fireplace and let the place fill with sooty wood smoke. Viola! He got the look he wanted….an antique ceiling.

Wine cooler in the upstairs sitting room at the top of the stairs near his bedroom.

Ladew wasn’t crazy about all his mother’s trophies (she was quite the horsewoman herself) so had them melted down and used the silver to make a punchbowl. I think this was a great idea…although his mother might not have agreed.

Living Room Downstairs. Note that the subject of most of the paintings is horses with maybe a fox or two thrown in for good measure.

Somewhere in the past 1200 years since this horse (perhaps Ming Dynasty) was crafted, he lost his tail. 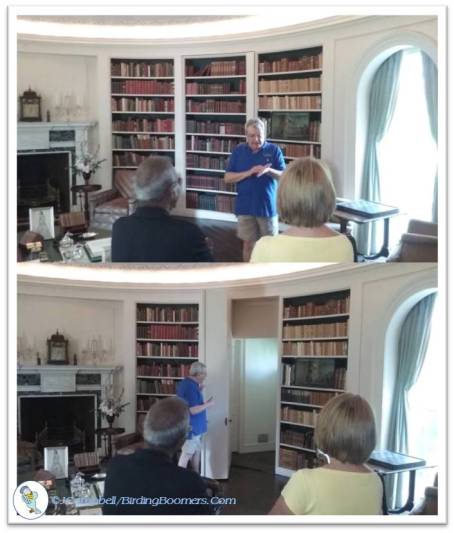 Circular Library with the hidden door…allows for a quick exit out the back of the house into the gardens.

With respect to his gardens, Harvey Ladew succeeded magnificently. While I missed a few stories and a few rooms on the tour of the manor, I am glad that I saved myself for the gardens….they were, after all, what I had come to see.

If you would like to visit Ladew Manor and Topiary Gardens, the address is 3535 Jarrettsville Pike, Monkton, MD 21111. The website is http://www.ladewgardens.com/.