It is the New Year and I am reminded of an old conversation I once had with my mama. Mama was born and raised in the south and was always coming out with wise old southern sayings and quotes, some of which were very well-known and some not so much quoted outside the family circle. But the conversation I usually remember this time of year had to do with traditions for New Year’s Day. Everybody knows you are supposed to eat black-eyed peas, greens and cornbread on the first day of the New Year to ensure prosperity all year round. The greens bring “greenbacks” and the peas bring the coins – silver and gold.  I think the cornbread just goes so well with the peas & greens; I am sure biscuits would work just as well and not cut into your future supply of legal tender.  But mama always added the advice that you ought to do on New Year’s Day what you want to be repeated throughout the year. For mama, I think that meant I should do some work like clean my room and help with the dishes without complaining. It also meant that I should remember the reverse corollary to the advice – “Don’t do anything you do not want repeated every day of the year ” like arguing with your sisters or fussing at your little brother or being ornery and stubborn along the way.

I have always tried to remember that advice and I was reminded of it recently when I was reading some announcements on the Virginia State Parks blog. Their advice was to do a First Day Hike in one of Virginia’s many state parks. Sounded like good advice so I tweaked it a bit for me and decided the thing to do would be to start a tradition to go birding on New Year’s Day. Being in Maryland, I decided to pick a park close by – no use driving all day and cutting into the actual time we would be in the park birding. So the plan evolved quite nicely. We would enjoy a nice leisurely breakfast and then head out to do a little birding at a park just up the road a piece we’ve been meaning to check out further and then we would head on over to Cracker Barrel to get some traditional southern food.  Good plan, right?

No, there’s no punch line. It all worked out pretty well except for the Cracker Barrel part. We decided to stop in at Kinder Farm Park and check out the pond there for a bit on our way over to Downs Park in Pasadena.  Kinder Farm was on the way and the little pond there is known to have a few ducks or two most of the year; but most of the year, the pond cannot be seen clearly because the grounds keepers do not clear the shrubs and trees from the pond’s perimeter. But in winter, you can see the pond from the road as you drive by and determine if there are any ducks to see before you get to the parking lot to park and walk all the way back to the pond.

January 1st was working out well.  There were some ducks to see although not many.  And there wasn’t any traffic on this winter morning so we actually didn’t have to go park and walk back. We were able to pull off the road and scope out the birds and grab a couple photos in no time flat. 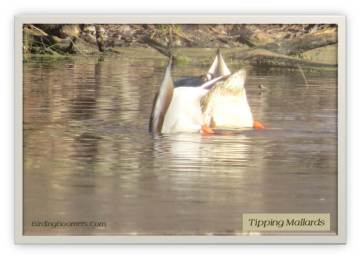 As usual, there turned out to be a pair of Mallards (Anas platyrhyncos) tipping and diving in one corner of the pond.

But there was also a pair of Hooded Mergansers (Lophodytes cucullatus) swimming on the far side of the pond.  The male was easy to see but the female was staying close to the edge of the pond and was mostly hidden by the twigs and vines hanging over the water.  If you look closely, you can see her in the background of the first picture above.

Finally, there were a couple Scaups.  At least I thought they were but when I got home and checked the photos to try to figure out if they were Lesser (Aythya affinis) or Greater (Aythya marila) Scaups, I found that I didn’t have Scaups at all. The bill was all wrong being edged in white and the body colors just weren’t right and the shape of the head was not quite round enough.  So it was back to the guide book to take a look.  Turns out the little duck appeared to be a Ring-Necked Duck (Aythya collaris) and that turned out to be an awesome find this birding day. 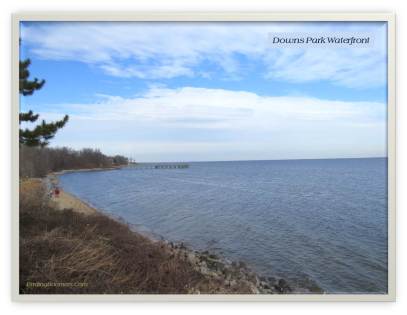 Then it was on to Downs Park. We had cruised through the place once before in summer but the park had been filled with cars and people so we had looked around and moved on to another park that was less crowded and more amenable to finding some birds. Today was our chance to check out the park again. We assumed that the cold weather would discourage most people and we might get lucky and have the park to ourselves.  There were some cars in the parking lot but not many.  We piled on jackets and gloves and warm hats and then unpacked the scope and binoculars and camera and headed over to the waterfront. I thought maybe our best bet for seeing large quantities of birds would be to check out the Bay for waterfowl wintering over in Maryland.  It was cold….and I mean frigid and blustery. The wind off the Chesapeake Bay was blowing and cut through my jacket like it was made of linen rather than thick fleece.

We headed to the overlook and noticed right away there was a good sized raft of ducks floating off the shore that turned out to be Canvasbacks (Aythya valisimeria).  We set up the scope and took a look but it wasn’t easy to see anything. The cold wind was hitting me in the face making my eyes water and making it extremely difficult to focus.  We were able to confirm that the ducks were Canvasbacks and that there were some Ruddy Ducks (Oxyura jamaicensis) here and there mixed into the larger flock.  I got a couple half way decent photos of the Canvasbacks but was never able to capture the little Ruddy Ducks at all.  We didn’t stay there long; it was just too darned cold.

We headed back towards the parking lot thinking maybe we could find a more sheltered walking path when we noticed that there was an Aviary over to the left of the Visitor Center.  The Aviary had a Barred Owl (Strix varia), a Red-Tailed Hawk (Buteo jamaicensis), and a Great Horned Owl (Bubo virginianus).  It is always a bit sad to see wild birds in a cage but these birds had been injured, rehabilitated, and could not be released back into the wild.  I was able to get a relatively good photo of the Barred Owl through the fencing but had no luck with the other two birds. We roamed down a trail or two but only turned up a single White Throated Sparrow (Zonotrichia albicollis) so we headed back to the car. Did I mention it was cold out there? 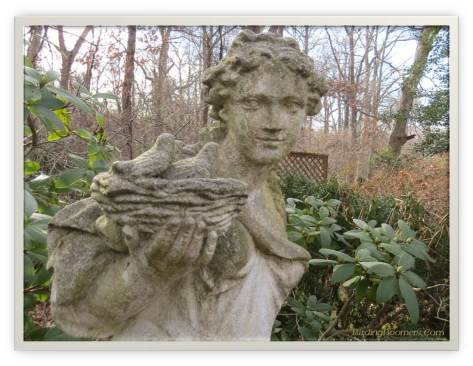 As we headed back to the car, we found a garden near the Aviary. It was apparently a part of the original farm that was later to form the basis for the Park and had originally been built for the estate owner’s mother. The small garden had been restored by the park management and I decided that we would have to come back in spring and see the garden in bloom, or at least in “green”.   There were several statues in the garden but one caught my attention. It was a lady holding a bird’s nest…it seemed appropriate to find this statute while we were out birding.  Guess I’m not the first person who realized that gardens and birds go together like biscuits and honey.  We stopped for a bit to sit on a bench and enjoy the garden, and while there, we spotted a couple Northern Cardinals (Cardinalis cardinalis) and a few Carolina Chickadees (Poecile carolinensis) but nothing more.

Back in the car and thawing out with the heater turned up to high, we elected to cruise through other areas of the park in the car rather than walking.  We did not have any further luck finding birds; I suspect they were all hunkered down in some brush pile or pine tree somewhere waiting for a little more sun to come peeking through the clouds. So it was off to Cracker Barrel for those black eyed peas and greens and cornbread I mentioned earlier.  But that was not to be. The wait at the restaurant was more than an hour and a half. Everyone in the county must have had my same idea for lunch (or early dinner considering the time).  Waiting anywhere for more than an hour just doesn’t work for me so we headed up the road and found a Ruby Tuesday’s where there was absolutely no wait at all. The food was good and filling and, most importantly, warming.

We headed home with some idea about maybe later in the evening, we would pop open a can of peas and thaw some greens and take care of things the easy way.  But, once we got home, we found some hot chocolate and a warm soft spot on the couch and soon found that taking a nap might be the thing to do after all that birding and walking. And when later came, we weren’t very hungry so never quite got to the peas and greens.  But we did fill our day with things we wanted to repeat throughout the year – birding and walking and gardens and eating and, oh yeah, napping.  Turns out following mama’s advice has never been easier.