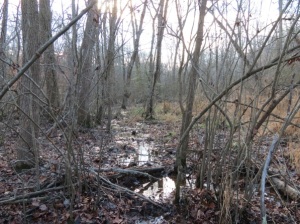 As I gaze out over the wetlands, I realize that I’ve seen this place before – maybe hundreds of times. It takes me a moment of pondering and then I know why the place is so familiar to me. I have seen it hundreds of times. I have passed this way on my daily commute. Well, maybe not exactly this way. My memory is somewhat off – I am now seeing the wetlands from the other side. For five years, I commuted to work downtown on the train. And every day I would get to the station as early as possible in the afternoon so that I would get a seat on the “northern” side of the train. That is, the view through the windows on my way home would be on the north side of the tracks. I knew that it would be evening – right around dusk – as the train rumbled through these wetlands and the view would be beautiful. The beauty of nature would calm my stressed-out mind and ease my soul so that, once home, I would be at peace. Sometimes in summer when the sun set later in the day, I would catch a gorgeous sunset as I craned my neck to look out backwards towards the west straining as much as my seat would allow as the train headed towards the east. But I rarely saw any birds in these wetlands.  Occasionally, I would spot a great bearded heron or a solitary white egret as the train rumbled quickly past the wetlands but rarely was there time to hope to see any smaller birds if, by chance, they were there. I saw so few birds there, even big ones, that I wondered if the water was contaminated.  At the time, I wrote a haiku –

on water peaceful and deep green

But, no ducks swim here

The water is not clean.

Okay, well not exactly haiku since it has twenty-five syllables rather than seventeen but it did reflect my thoughts at the time and the “zen-ness” of the moment.

Each evening I had maybe twenty seconds to scan that view. I often wondered if it would be possible to get to those wetlands and explore them, maybe do a little birding. The wetlands appeared to be a part of a small compound of houses, a mini community sitting outside a larger suburban town but isolated from the rest of society by the environment. I wondered who would choose to live in such isolation but remembered that the houses couldn’t be more than three minutes by road from town.  Come to think of it, the location was perfect – close to town and civilization but isolated and peaceful at the same time.  But on long winter nights when the wind howled and dogs barked in the distance, you’d feel every bit of those woods and wetlands pressing in on you and reminding you just how isolated you were.  I had heard of a religious group – maybe a cult – that lived hereabouts whose inhabitants did not like strangers prying around.  The local teens spoke of voodoo churches and slipping down to the area to get their thrills knowing they were still close enough to town to make a quick getaway if things got a little too creepy.  The stories lent a dark, possibly evil mystique to the place.  Why would people live so far in the woods if there wasn’t something to hide? Doesn’t living in the deep dark swamps lend itself to things best not discussed in the daytime?  Or, does it? 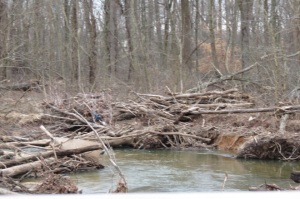 Now I am on the other side.  I can see the train tracks in the distance lending a boundary to the wetlands and cutting the land off from the river flowing near the tracks. I am in a wildlife refuge on a nature drive. Reality is not anything like I had imagined. There is nothing mysterious here at all. Still, it is quiet and peaceful and just a little bit mysterious. The houses I see in the distance are not really isolated or even surrounded by the wetlands. The river is nearby and there are plenty of fields for growing wheat and corn – good bottom land with rich soil for crops along one side of the houses. And the nature preserve with its wetlands along the northern side of the farms. Those huge creepy buildings are now just farm houses, barns, and sheds – all very useful when you work the land. So much more is exposed from this side and with the exposure comes clarity and lightness. The character has totally changed in the blink of an eye – gone from dark evil to benign sunshine – just like anything that is foreign and unknown until you venture out into the wilderness to find the good inside. And near the farms, the refuge is what it is – a place where foxes and raccoons roam and mallards and geese swim and where a couple great bearded herons are known to fish in the wetlands and where the water is actually relatively clean.