A couple weeks ago, we visited Ladew Topiary Gardens near Monkton, Maryland. I told you of our visit with an initial blog on June 8th in which I wrote all about Harvey S. Ladew, the creator of this beautiful garden…or gardens, should I say. But I stuck mostly to Mr. Ladew and the manor in that initial blog. If you’d like to go back and review, the link is here.

I promised that I would share some photos of the actual gardens…or, as much of them as I saw on this visit. I did not quite walk all 22 acres of gardens. I know I missed the “Garden of Eden” which I hear has statues of Adam and Eve and I also missed the Nature Walk…but that just leaves more to see on our next visit.

So I am now providing those photos…or, at least some of them since you will understand that I took more than two hundred photographs and, even though I had plenty of blurry shots to delete, I still have quite a few to share….but I won’t share all of them….just a goodly bunch. (Now, is that a proper phrase? Yikes! Mrs. Mintz back in eighth grade would look at me knowingly, shake her head in exasperation, and pull out the old red pen and start scritching away at my work….that is, if she were here now to read any of it. On the up side, some of what she tried to teach me did, in fact, sink in and I continue to write….unlike the stuff Mrs. Doehla tried to teach me in those Algebra classes a few years later which, like everyone else, I’m not sure I would know how to use even if I wanted to use it.)

So, without further ado, here are the photos of the gardens.

We started our tour at the Café…..because it is about the food, you know…..where we enjoyed chicken salad sandwiches and cold lemonade on the patio. Since it was a rather warm day and most folks opted to eat inside, we had the patio all to ourselves…and that was just lovely as far as we were concerned. You couldn’t have asked for a prettier day. 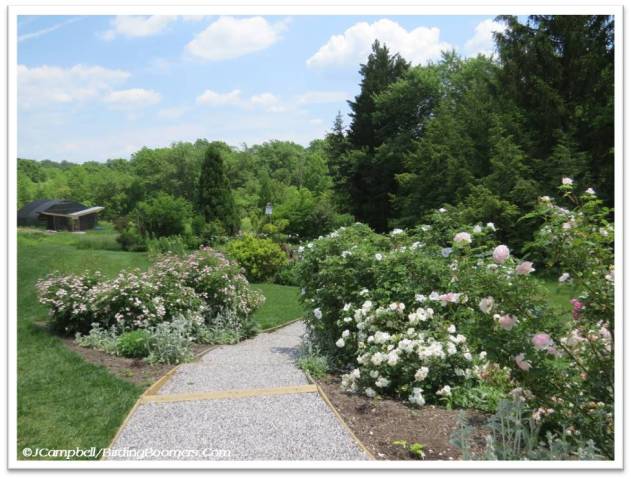 Next we meandered down the garden path to the cutting garden where there were roses galore and loads of peonies. 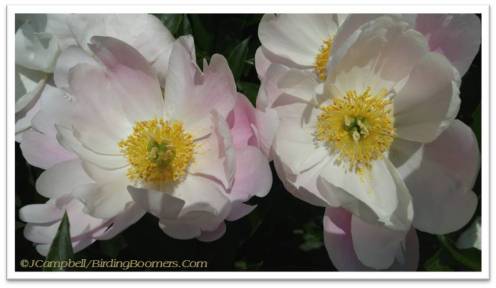 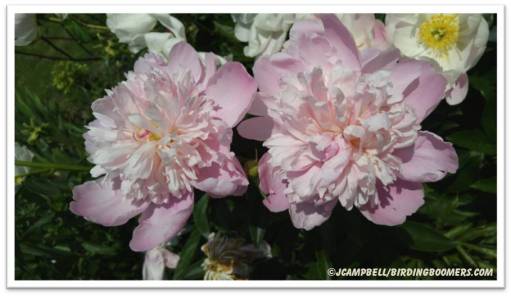 Next we headed down to the Butterfly House….we knew it wasn’t open yet for the year…but the wildflower meadow looked lovely and invited exploration. I particularly liked the yard art in the meadow. Well, I suppose the artist wouldn’t call it yard art..he’d probably be snobbish and drop the “yard” but it is what it is – art for the yard…yard art…or in this case “meadow art”. 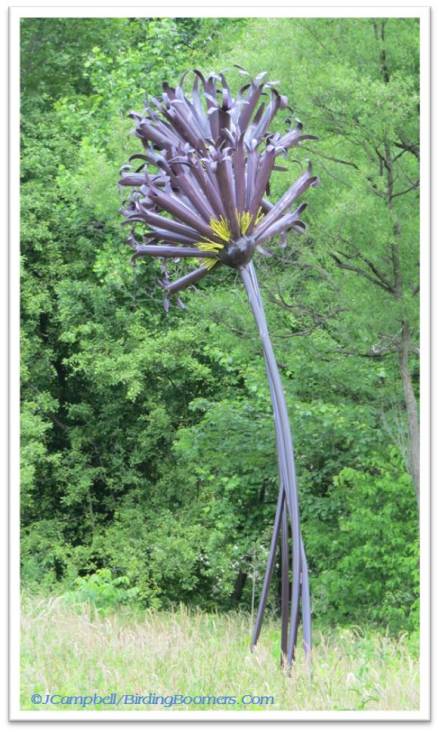 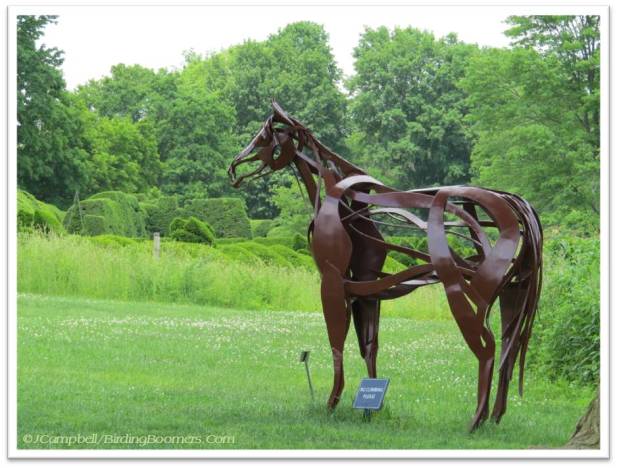 Then again, it seems the artist had another…and much better name for the art he added to the gardens.

The “beautiful weeds” part would work for my flower beds at home….well, the “weeds” part anyway. 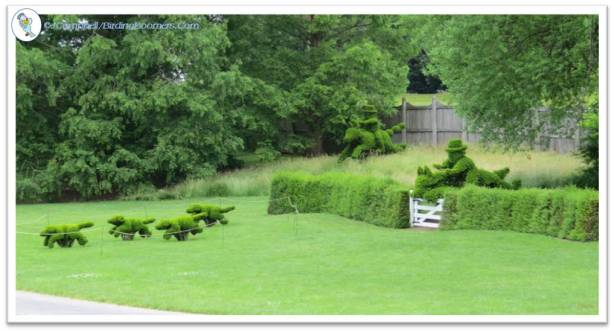 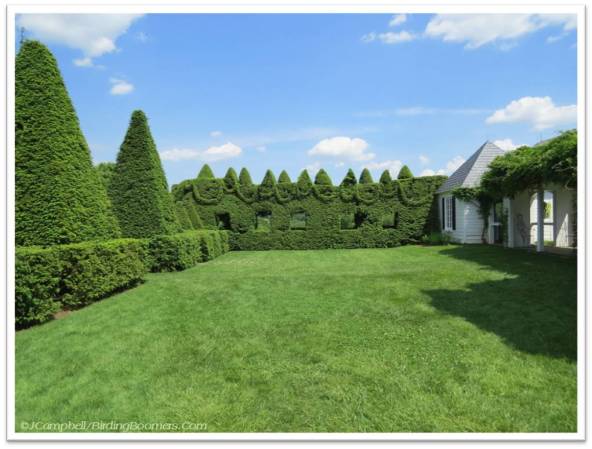 I suppose I expected lots of little hedges trimmed to look like little creatures like the foxhunt scene above. I wasn’t really expecting walls and windows and garlands carved into the yew hedges…not to mention all sorts of geometric shapes of all sizes from very small to very very large. It was impressive to say the least. 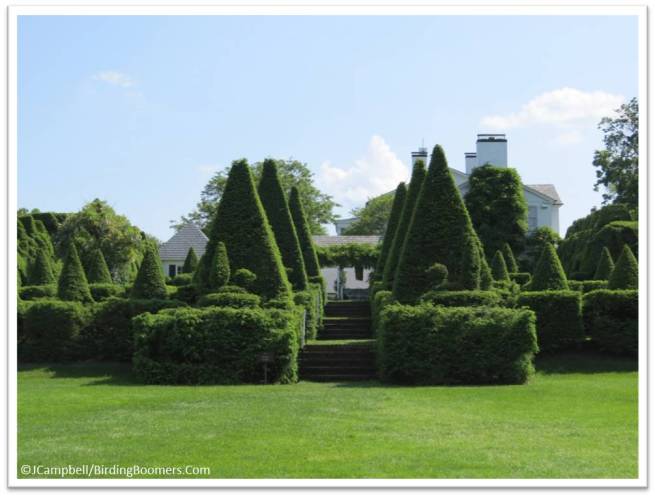 View through the topiary window to the wildflower garden.

We spent quite a bit of time in the Iris Garden. This time of year the Iris’s were blooming so it made sense that we would gravitate there….especially since it sort of went down hill from the main topiary gardens on the east side of the manor. I do downhill quite well….the uphill part was not so easy. 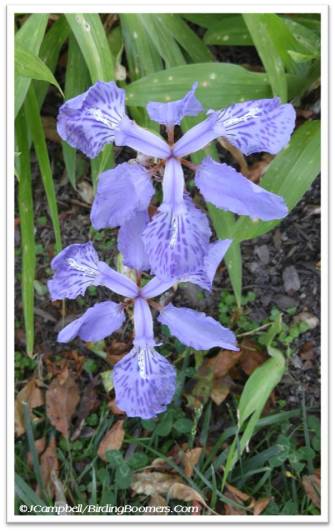 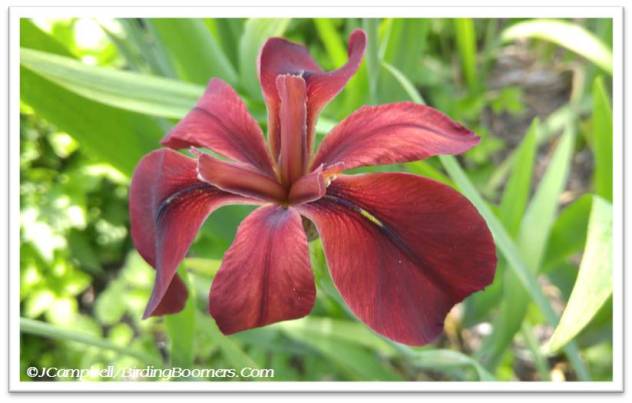 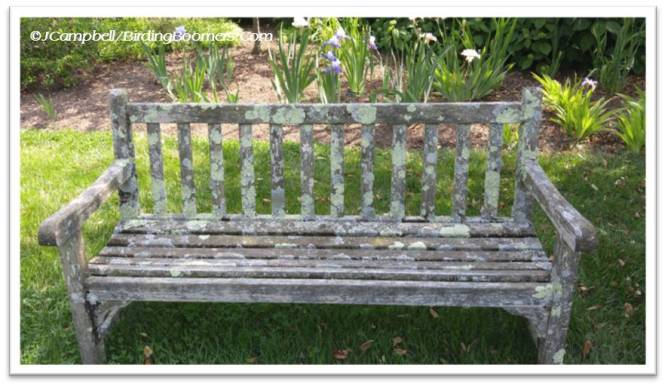 We spent a lot of time trying out the benches in the shade in the Iris Garden…and why not? They were lichen covered and lovely in their own right.

At the bottom of the Iris Garden, you can peek through the arbors and see a topiary ship setting sail into the wildflower meadow. Nice!

Our last stop on our tour was the walled rose garden. What can I say? The roses were plentiful and in full bloom. I love roses climbing on brick walls. It reminds me of cottage gardens and lovely old estates. Throw in a few cherubs (and maybe an imp of a satyr) and a pond with a frog or two and you’ve got paradise in a garden as far as I’m concerned. The smell of all those roses was heavenly, by the way. 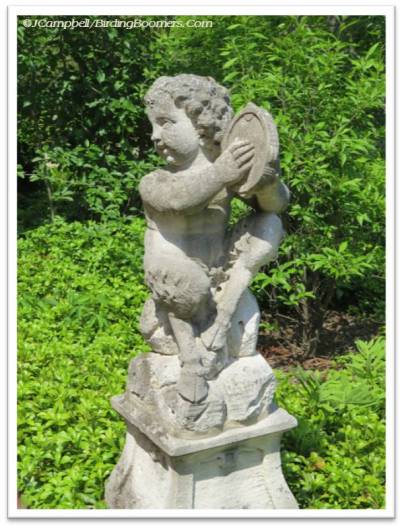 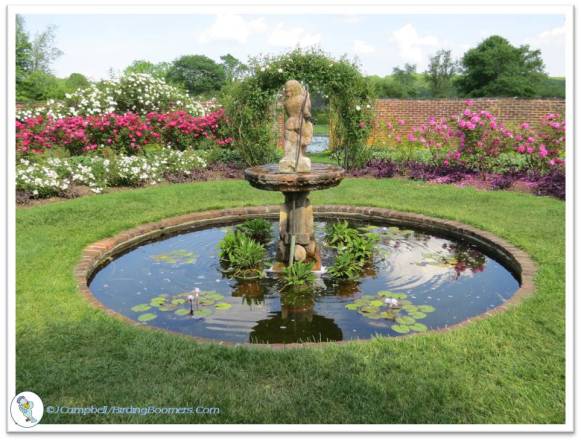 If you would like to visit Ladew Manor and Topiary Gardens, the address is 3535 Jarrettsville Pike, Monkton, MD 21111. The website is http://www.ladewgardens.com/.

“And who of you by being worried can add a single hour to his life? “And why are you worried about clothing? Observe how the lilies of the field grow; they do not toil nor do they spin, yet I say to you that not even Solomon in all his glory clothed himself like one of these.…” Matthew 6:27-29

We arrived at the Venice Rookery just a bit after noon. Although it was a little cool, the sun was shining on a clear blue-sky with those huge white fluffy clouds that remind you of how wonderfully marvelous it is to be alive and outside enjoying all that this earth has to offer. We hadn’t been to the Rookery before and were anxious to see what birds, if any, might be nesting there. Even though it is Florida, I was not sure that any birds would be raising chicks in the cool weather this season. Raising babies is a dicey business even when the weather is nice and warm.

But there was no reason to worry…not one bit. There were birds – Cormorants, Egrets, Herons, and Anhingas – all going about the business of nesting and raising chicks in the Rookery….just like they should be.

When we arrived, it was relatively quiet. There were a couple other people there and one of the locals ambled over to give us the scoop on the Rookery and the lay of the land (or lake in this case). The site which is on Annex Road in Venice, Florida is not very large – a few acres perhaps – and consists of a smallish pond with a brushy tree island in the middle. It is on this island that the birds come to nest.

I was advised that the lake/island was man-made just for this purpose but I do not know for sure. Not that I question that the whole site was planned and developed by people but I did have some doubts. After all, it is not always a question of “if you build it, they will come.”1

Consider Pelican Island National Wildlife Refuge (NWR). It is a beautiful spot on earth – we’ve been twice and we did not see nary a Pelican there on either trip. It appears that the pelicans have abandoned the island that is part of the refuge that the birds had apparently used as a rookery for hundreds, maybe thousands, of years. There is a beautiful park with trails and a lovely boardwalk that gives a great view of the island in the Indian River….but the White Pelicans no longer nest there. We left the refuge and drove some five or so miles down the road along the Indian River and, as we crossed the causeway bridge, discovered an island filled with pelicans and nests….of course, not where anyone could stop and look and take photographs. So I assumed that the Pelicans had decided to start up a new rookery on another island notwithstanding the efforts of the parks service to protect them at the old rookery site. So, pretty much the birds go where the birds go.

But back to the Venice Rookery…..You can walk around the lake and see the Rookery from all sides or you can just take a seat on one of the many benches provided by the Audubon Society that leases the site/rookery from Sarasota County. Our impromptu guide apparently loves the place for he mentioned that he came every day to sit and watch/study the birds and I cannot think of a more relaxing and engrossing activity….wonderful way to spend your days.

So who doesn’t love babies? There were actual babies to be seen in the nests although I have a tendency to call all birds – adult and juvenile – “babies”.   Like everyone who comes to the site, I stopped immediately on the edge of the lake directly across from the island and started snapping pictures and excitedly saying, “Oh, look at the Great Blue Heron on the top….and the Anhingas on the tree on the left side….and wow, did you see that Great Egret displaying for his female companion?”. I was all over the place looking at the birds oohing and ahhing and trying to get just one more photograph. The birds were just so close and I was sure I’d get some great photos…well, I hoped so anyway. We walked around the lake – a relatively short and easy walk with benches all along the way so that there was always a place to take a moment and rest and watch.

My husband and I have a birding/hiking rule …… “If you come to a bench, sit on it”. We have found that benches can be few and far between sometimes on the trail and taking a moment to sit and be quiet can give the birds time to accept our presence in the area and come out of hiding….. possibly giving us a better view. 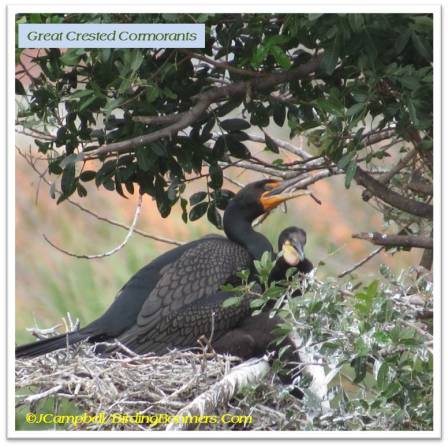 So, once I sort of calmed down a bit and we had checked out the rookery from all sides, we found a bench in a warm sunny spot and just let the atmosphere of the place surround us. As I sat listening to the chirping, cackling, peeping of the birds and feeling the warm sunshine on my face and back, I pondered the peacefulness and beauty of the place. Everything seemed so calm and serene. In a world filled with war and hate and all sorts of strife, the birds are oblivious to all that……just living out their lives, eating, sleeping, mating, nesting, raising their young…surviving. I was at once reminded of the “lilies of the field” that Jesus spoke of…….they do not work or spend their days worrying about things that they cannot change or prevent…they just live. And the lilies are beautiful and perfect in their situation – exactly where and when they should be at any given moment in time. Likewise, the birds in the Rookery seemed to be peacefully living out their lives with absolutely nothing to worry about. 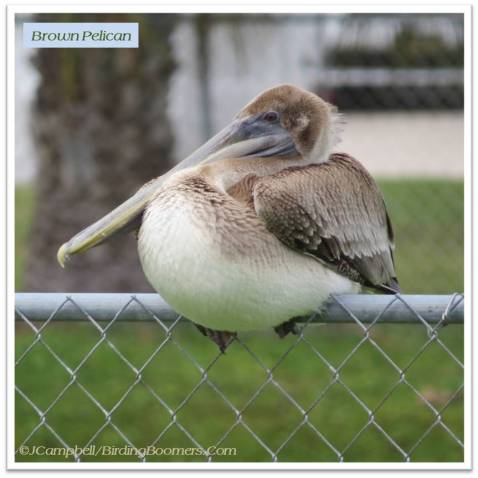 But all life has strife. An alligator also lives in the lake at the Rookery. He (or she) swam lazily near the island, I’m sure waiting patiently for some mishap or accident that would put a chick within his reach. I’m also sure his patience is rewarded at times….more than I like to think about. But the alligator is also a part of the “circle of life” and, perhaps, has babies too that need a parent’s help. Most animals are relatively helpless at birth and spend time in a nest (of sorts) close to a parent who provides food and stands guard providing sustenance, safety and security…but eventually, all babies mature and all must stand on their own. For all life on earth is precious and so very fleeting….time flows on…..the proverbial sands flowing too quickly through the hourglass.

We all must reconcile ourselves with this reality. We live, we struggle, we die…..and, although outward appearances show things to seemingly be peaceful and calm, there is always the struggle. It is what it is and it is what it will continue to be…..for as long as there is life on earth and as long as there are Egrets and Herons and Cormorants here at the Rookery.